On May 28th, 2015, at around 4:00 am, a rabbi in Southeast Ukraine discovered this unexplained ball of light on the CCTV cam in his synagogue. It is approximately the size of a football/soccer ball and hovered for about 20 seconds before disappearing again. Experts are baffled, but some of the theories have been; extraterrestrials/UFO, a ghost or spirit entity, or a rare natural phenomena called "ball lighting".

The ball of light can be easily written-off as a "natural phenomena", however that wouldn't explain the white orbs that display more intelligence? In 2013, a CCTV cam in Russia caught a white orb, with obvious signs of intelligence, traveling up and down a secluded road in the woods.

In a restaurant's kitchen in 2011, a security cam caught a small white orb. You may think it's just a bug, but watch as it splits into two, then move about in unison.

Back in 2012, a video and paranormal enthusiast caught another small white orb of light hovering just below his clothesline in his backyard. The videographer insists that it is not a bug or dust; nor does it move like either, as bugs/dust do not just hover.

And finally, one of the most well-known orbs caught on camera is the orbs of Oliver's Castle, beneath the slopes of the castle's hill fort, just to the north of Devizes in Wiltshire, in 1996. They were recorded as they created crop circles.

So I ask you, are these examples of white orbs or balls of light natural or a paranormal phenomena? Work of extraterrestrials? Ghostly encounters? Perhaps even a inter-dimensional entity? 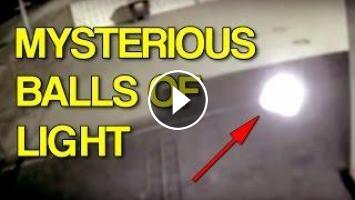