Sometimes, within our Earth, there are certain "Things" that are totally unexplainable. Research after research, and yet science cant come up with such answers. Answers to certain mysterious living things that show up every now and then without any logical reason and that look extremely terrifying to see. For ages, we thought that these "Creatures" could only be seen in movies, but I think we were wrong. Within this countdown, we are only showing the realest and scariest creatures that have been caught by humanity. And whatever happens, Im here with you, so make sure to stay till the end! With this being said, prepare, because 5 Scariest Creatures Caught On Camera & Spotted In Real Life! Lets...Begin!

1. The Creature From Another Planet

This next video your about to see was recorded in an abandoned property in 2008. The video shows a couple of friends roaming around this abandoned house that has been told to be haunted for quite some time. One of the friends in the video decide to be somewhat brave, so he takes the flashlight on one hand and goes into one of the doors that leads inside this haunted house. Right when he opens the door, something very bizarre looking comes crawling and screaming at him with no hesitation. No one can identify this mysterious creature so I want YOU to be the judge on what is seen. Here it is...

2. The Strange Creature From Brazil

You might have seen this next footage on my "5 Aliens Caught On Camera & Spotted In Real Life" video. The video shows a very strange alien like creature captured in Brazil by a group of people that have decided to not come forward to any government. And all of this because they are afraid that the government might take their captured footage of this weird sighting and lock it away on private zone. Fortunately, the video has been shown to the public and here it is....

The video your about to see was recorded in a Canadian Asylym which it closed in the year 2000. Inside the video, a couple of friends were roaming around this abandoned place when suddenly they hear very weird screams coming from up stairs. The friends scared and tense run up the stairs to see what the screams were, and from one of the rooms, out of complete nowhere, something VERY scary looking with the appearances of an exorcist comes crawling towards this group of friends. Fortunately, they run down the stairs and immediately out of the location without ever coming back again. Anyways, here...is the video.

The footage about to be shown was recorded in the backyard of a house by one of the home owners. Inside the video, the home owner recording is seen walking around his house when all of a sudden, he hears a weird animal screech coming from behind him, and as he tilts his camara, a creepy and humanoid looking creature is seen on top of his rooftop staring at the home owner. Some people think that the mysterious looking creature is just a human but MANY claim it to NOT be one. But YOU be the judge on this one. So here..is the video.

5. The Ghostly Creature From WWII Tunnel

What your about to see was recorded in Japan in an old World War II tunnel which is about 1500 feet into the ground. The tunnels are said to be radiactive and are NOT allowed to the public. The people who recorded this next clip were engineers that were sent into the tunnels to test the radiation levels. One of these engineers were recording when out of nowhere, something very strange looking glides into the wall leaving the people that were in the tunnel in complete shock. But enough with the talk, here.... is the footage.

Thank you so much for watching! Smash that like button for more, make sure you share the video with your friends and dont forget to subscribe! 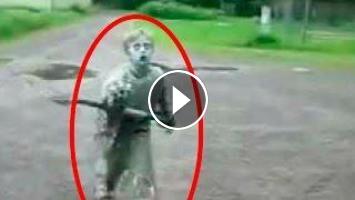 5 Scariest Creatures Caught On Tape & Spotted In Real Life! Description: Sometimes, within our Earth, there are certain "Things" that are to...