This Buddha face was found a long time ago on the surface of Mars within Google Mars map and I wanted to take a look to see if it was still there.

Surprisingly enough, the face was still there. It has a close resemblance to the Asian happy Buddha, but is just a monument to an important person in this alien culture that once lived here.

The fact that Google no longer tries hard to hide this information makes me wonder if they have a new plan. The don't seem interested in deleting things found on Google Moon or Mars, but still continue to delete UFOs found on Google Earth Map. So far, over 15 UFOs I have reported on this site have been deleted, plus many more before I made the site that I recall seeing others report. So, why hide UFOs and not the ancient evidence from Mars and other planets? Well, I believe it has to do with something more than just interplanetary travel. Its to do with something so dangerous that no human should ever have this power. Its called time travel.

Now what would you do with such power? This is why they hide UFOs.
Scott C. Waring 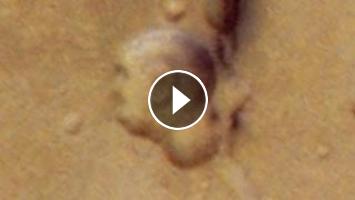 Ancient Faces Still On Google Mars. This Buddha face was found a long time ago on the surface of Mars within Google Mars map and I wanted to take a lo...