Do you believe in UFO's and Aliens? UFO's everyday are being captured on Tape and Caught on Camera, these are some of the best UFO sightings 2014.

Please subscribe and be a part of the livescifi.tv family!

An unidentified flying object, often abbreviated UFO or U.F.O., is an unusual apparent anomaly in the sky that is not readily identifiable to the observer as any known object. Originally referred to popularly as "flying saucers" during the late 40's, the term UFO became more widespread during the 50s at first in professional literature, but later in popular language. UFOs garnered considerable interest during the Cold War, an era associated with a hightened concern for national security. Various studies, both governmental and civilian, have concluded that the phenomenon does not represent a threat to national security nor does it contain anything worthy of scientific persuit, although there is disagreement. Culturally, the phenomenon has often been associated with extraterrestrial life or government-related conspiracy theories, and thus has become a popular theme in fiction.

The Oxford English Dictionary defines a UFO as "An unidentified flying object; a 'flying saucer'." The word was first used in print by Donald Keyhoe in 1953.

The acronym "UFO" was coined by Capt. Edward J. Ruppelt, who headed Project Blue Book, then the USAF's official investigation of UFOs. He wrote, "Obviously the term 'flying saucer' is misleading when applied to objects of every conceivable shape and performance. For this reason the military prefers the more general, if less colorful, name: unidentified flying objects. UFO (pronounced Yoo-foe) for short." Other phrases that were used officially and that predate the UFO acronym include "flying flapjack", "flying disc", "unexplained flying discs", "unidentifiable flying object", and "flying saucer".

The phrase "flying saucer" had gained widespread attention after the summer of 1947. On June 24, a civilian pilot named Kenneth Arnold reported seeing nine objects flying in formation near Mount Rainer. Arnold timed the sighting and estimated the speed of discs to be over 1,000 mph. He described their movement like "a saucer skipped across water," leading to newspaper accounts of "flying saucers". (see Kenneth Arnold UFO sighting for details).

In popular usage the term UFO came to be used to refer to alien spacecraft. and because of the public and media ridicule associated with the topic, some investigators prefer to use such terms as unidentified aerial phenomenon (or UAP)or anomalous phenomena, as in the title of the National Aviation Reporting Center on Anomalous Phenomena or NARCAP. 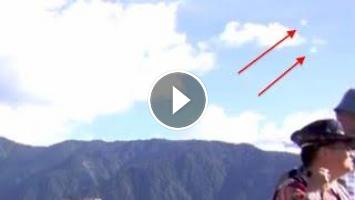 Do you believe in UFO's and Aliens? UFO's everyday are being captured on Tape and Caught on Camera, these are some of the best UFO sightings 2014. Ple...