The best is yet to come our entire team returns for scrimmage and practice. We also added Matt and Andrew who I felt played some good ball. Big James also makes his return to the big game first time in months he joined team camp. Everyone is healthy and are entire roster is full after months of team building. This is a really special team practice its not often the entire team can get together to compete but were looking good and building chemistry. Your going to see a game of 21, two on two and three on three. There is thirteen games in this reel full of great passes, shots, defense, three pointers and stiff competition. There were other games as I split the team up on two courts due to the MAC Facilities covid restrictions. May 1st restrictions are being lifted so we may get to compete soon enough! I was only able to film some of the games but what we did is had two two on two games while the winners played the winners the losers played the losers. Everyone won some and loss some id say we ran pretty even many close games. Some of the best ballers come from the Carson City area believe it or not. Most of our team players are older, wiser and seasoned basketball players certainly entertaining to watch. While the work continues I bring our viewers March Madness its full of gems. Also one more thing check out the play at the 1:14:08 not sure who is happier Shannon has a big shit eating grin on his facing passing the ball to me however I take a fall and end up still making the pass back to him. You NEVER give up on any play you have to take risk and go big. Ball was still in play and that play had drawn in all three players on the other team thus leaving open two of my own players. While Shannon did not make the bucket the effort was there!!!! GO PHANTOMS! 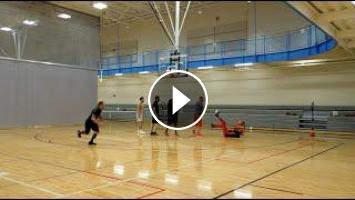 The best is yet to come our entire team returns for scrimmage and practice. We also added Matt and Andrew who I felt played some good ball. Big James ...