Daywalkers Paranormal Show interviews Author, Paranormal Investigator and Demonologist Kyl Cobb. We were joined by our special guest co host Michelle LeBaron.
Traveling to sacred sites across the globe, encompassing fifty-nine countries, Cobb has been able to encounter many of the world’s mysteries first hand. From Egypt to the jungles of Guatemala, there is scarcely a pyramid in the world that Cobb has not climbed or explored. Cobb has spent time in the homes of shamans and watched Mayan Sun Death rituals as a welcomed guest. From Presidents of countries to impoverished villagers in the Middle East, Cobb has been honored with a chance to embrace their lives. With each adventure, Cobb’s understanding of the universe has changed. According to Cobb, “Many people dream while they sleep about unknown, exotic places. I have always believed that the dreams I have in waking moments are far more useful. Without these waking dreams, I could not see the magic and mystery that surrounds me. If I can see the possibilities, then I can realize them.”
Having studied twenty-two different religions, a decade ago Cobb was called to enter the field of paranormal investigation unexpectedly. “A young lady needed help…,” commented Cobb, “and when someone asks for your help you do what you can to try to help them. Back then, my first team of paranormal investigators didn’t know what we doing. We got lucky and the impossible found us.”
The road to understanding has required tens of thousands of hours of research and first hand investigation. Cobb reflects on the experience with, “I am obsessive about research. When I started researching my history book on Griffin, Georgia, I read over 5,500 newspapers from a neighboring town to get a better historical insight. You can’t trust modern history sources. So, whether I am researching demons or a con man from the 1800s, I will spend weeks searching for contemporary sources.”
Over the past few years, Cobb has come to be regarded as an international specialist and lecturer on the history of demonic cases around the world. Often speaking to beyond capacity crowds, Cobb developed a reputation for discovering the hidden truth behind many of the world’s top supernatural events. Often, Cobb’s reputation has been earned by revealing perfectly natural causes behind the hysteria.
Cobb published his first paranormal book, Ghosts and Demons: The Lost Things in August 2015. Over 300 pages, Ghosts and Demons: The Lost Things is designed as a text book for paranormal investigations. Focusing on the science behind the supernatural as well as taking a candid look at the history of a number of paranormal locations and events, Cobb’s book has been embraced by paranormal investigators around the world as the “go to” reference book. When asked to reflect on the book, Cobb says, “What makes this book different from all the other paranormal books is that I try to answer the questions of ‘Why?’ There are so many paranormal investigators that get their education from television without knowing the truth behind the theory for the equipment they are using. I had the same questions when I started. So I wrote this book to untangle the truth from the fiction. Along the way, I became fascinated by the real history behind a number of historical legends. Suddenly, I had a book.”
In January 2016, Cobb’s second paranormal book, Ghosts and Demons: The Truth of the Bell Witch was released. Focused on finding the real story behind the two-hundred-year-old poltergeist case, Cobb applied his unique historical investigative skills to separate the truth from the urban legends. This short work takes a critical look at the Bell Witch legends as presented in historical documents. Unraveling two hundred years of lies, distortions, and profiteering, Cobb disproves many of the legends fundamental assertions.
In September 2016, Cobb’s third paranormal book, Ghosts and Demons: Disturbed Destinations was released. Unlike many paranormal travel books that rely on internet histories as background for a "haunted" location, this book does the hard work to research the true story of over two dozen locations claiming paranormal events.
The Ghosts and Demons series of books is available at Amazon.com, BarnesandNoble.com, and Lulu.com as well as bookstores everywhere. 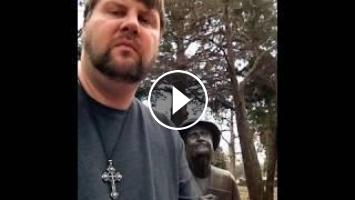