Dramatic times for the northeastern Attica and fiery outbreaks remain active in many areas. Ash have already been over 120,000 acres. Reinforcements from Greece and abroad. Flaming fronts and other regions of Greece. Anazopyronontai fronts to Dionysus and Marathon

History of outbreaks of fires in areas of Marathon Avenue to St. Stephen, to Dionysus Penteli, near the PIKPA Penteli, Grammatiko to Sesi and in Upper Souli, by Barnabas to Kapandriti and Lilly Foundation, the Kallitexnoupoli. More than 120,000 acres of forests and crops have become ashes.

In fiery grip is the dew, Dionysus, San Stefanos, Stop, Puerto Germeno, Marathon, the Drafi the Old Penteli, the Anthousa the Sesi, Nea Makri, Ano and Kato Souli. Particular problems because of the revival occur because of constant changes in wind direction, are presented in the areas of Ano Souli with ropes.

Continued with undiminished intensity fire, which already has caused incalculable damage to homes and burning 120,000 acres. Critical considered today night on the course of fire, as residents of North East Attica fear that the nuclear nightmare will continue. In order to identify possible early revivals and to protect areas not affected will be patrolled by the army throughout the night.

Shortly after 7 pm the main fire front were located in Kalentzi the Barnabas and Pallini, while the situation in San Stefano and Penteli is slightly better. Homes evacuated in Dionysus, while earlier the flames approached the monastery Pentelis. Went there and Archbishop of Athens and All Greece, Mr. Jerome, was evacuated while the old Pentelis Square, and the fire has reached the main village in the area. The fire threatened the hospital Pentelis Children who have evacuated since yesterday.

Controlled fires were Kalyvia Thorikon in Markopoulo and Drop Kouvara area. In contrast, under control were the three new outbreaks of fire occurred in hashish, near San Kyprianou. Depressed or mikroesties areas Anthousa, Spring, Pikermi and coolness. Strong forces of Fire, with the participation of the military, the Air Force and Navy, and volunteer forces and local authorities, seek areas.

While air companies operate two Italian planes arrived in our country to help fight the hot forehead, and arrived and a helicopter from Cyprus. Expected aircraft from France and Austria.

Closes, in part, the Marathon Avenue to facilitate the work of firefighters and closed all roads to Dionysus. A state of emergency has been the area of eastern Attica, after a decision by the Secretary-General for Civil Protection Margaritis Mouza, after verbal agreement with the Prefecture of Eastern Attica, Leonidas Kouris. 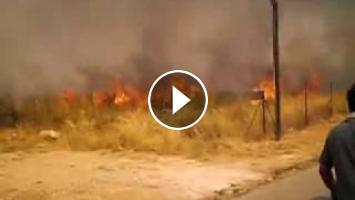 Dramatic times for the northeastern Attica and fiery outbreaks remain active in many areas. Ash have already been over 120,000 acres. Reinforcements f...