Haunted Auckland Whatipu Investigations:
WHATIPU LODGE / GIBBONS HOMESTEAD & the HAUNTED DANCEFLOOR CAVE.
On July 18th , 2020 the Haunted Auckland team, road-tripped back out to this remote, but intriguing and beautiful West Auckland region to spend a night at the reportedly haunted Gibbons Homestead, , as well as doing a trek out to the allegedly haunted ‘’dancefloor’’ cave, in the hopes of experiencing interaction or documentation to accompany the stories that span many generations.

The region has a dark and tragic past. mysterious deaths, suicides, drownings and murder.
Tragedy occurred in 1863 just inside the Manukau Harbour entrance south of Whatipu. The ship HMS Orpheus ran aground in the biggest shipping disaster in New Zealand history, causing the deaths of 189 people on board. Many washed up dead along the shoreline with the tide.
Since that devastating event, many people have claimed to have witnessed apparitions along the coastline.
Mysterious lights are also seen flitting through the dense bush at night in areas deemed unreachable.
There are reports of the sounds of guttural screaming being carried along on the wind with no apparent source.
Many say the area of the tragedy feels heavy and emotional. Much sadness, fear and uncontrollable despair is apparently felt in certain areas.
One such witness was former Waitakere City mayor Bob Harvey who, after his own personal experiences there, refers to the area as a ‘coast of ghosts’.
The original settler homestead of the area, now called Whatipu Lodge, was built in 1860. Local mill operators, the Gibbons family built the home and resided in it until moving away in 1929. Many years, and a few owners later, the Auckland Regional Council took it over in 2002.

A former owner, as well as previous tenants, has reported strange activity while living in the home. One common spirit that many have described in detail is the ‘Pink Lady’.
It is thought that the mysterious ‘glowing, translucent woman’ with a ‘pink aura’ who appears mostly during the daytime is that of one of the original occupying family, Matilda Gibbons.

The largest of the caves was once used as a social gathering site; complete with a large wooden kauri ballroom dance-floor, now buried beneath five metres of shifting sands.
For more than 60 years, from 1899 onwards, party-goers trekked across the rugged Whatipu coastline to Te Ana Ru cave to mince across the lamp-lit floor and steal away into dark corners.

Paranormal activity experienced in these caves - Shadow people and apparition walking around, the sounds of talking and singing. Also, the rhythmic thumping of hard shoes on timber; as if someone were dancing, perhaps?
For more, visit www.HauntedAuckland.com
Sign in or sign up to post comments.
Be the first to comment 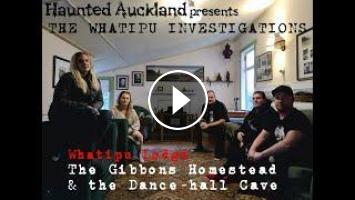