We are thrilled to welcome Lyle Blackburn back to Monster Men. Lyle is a renowned author, musician, cryptid researcher and now co-producer, narrator and star of the new “BOGGY CREEK MONSTER” documentary. He is also a contributor to Rue Morgue magazine. His new book, MONSTRO BIZARRO, is part of the impressive Rue Morgue Library collection.

You’ve seen Lyle on cryptid documentaries on Destination America and other channels. He was also featured on Monster Men’s first ever two-part episode, where we discussed his books THE BEAST OF BOGGY CREEK and THE LIZARD MAN. Check out Monster Men episode 58: https://youtu.be/i8a8ETrl3xA

Lyle tells us all about the fascinating case of the Boggy Creek Monster that inspired the 1972 movie, The Legend of Boggy Creek. It’s a story that still resonates today with the people of Fouke, Arkansas and continues to grow as sightings continue to be reported today. We also get some behind the scenes stories of what it’s like to be a part of a movie/documentary. We also get a quick look at some of Lyle’s crazy horror memorabilia collection. It’s simply amazing.

We love having Lyle on. He’s a great guy and a kindred spirit with the Monster Men. It was hard to stop talking, with him. We could have gone on all night about cryptozoology, horror movies and old TV shows.

You can purchase MONSTRO BIZARRO at the Rue Morgue site. - http://www.rue-morgue.com

Monster Men: Where Horror Hangs Out

The Monster Men take on all things horror and paranormal with their special brand of graveyard humor. If you're into vampires, zombies, UFOs, werewolves, ghosts, movies, scary books, movie reviews, the supernatural or just about anything dark and monstrous, welcome home. 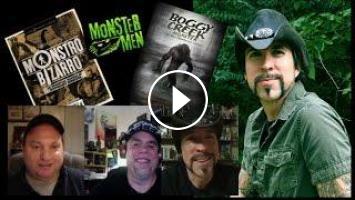 We are thrilled to welcome Lyle Blackburn back to Monster Men. Lyle is a renowned author, musician, cryptid researcher and now co-producer, narrator a...