The journey picks up with us leaving Mountain Well as our next destination would be the ghost town of La Plata. Our trek would be intense we would climb through many canyons searching for remnants of the town, mines or anything connected to silver boom which reached its height here from about 1862 till 1868 when Silver was discovered high up on the ledges of the Stillwater Range. Were going to take the road less taken journeying along the cliffs of the Stillwater Mountains and eventually right on over them till we see Dixie Valley below. Their is not allot of signs and their is quite a few back country roads so we did get turned around but eventually ended up downtown La Plata which today so very little remains. La Plata had hotels, saloons, stores, ten stamp mill, post office and even a courthouse. It also held the Churchill County seat for a few years. I will take you on an adventure to see a few stone walls and ruins which is really all that remains of this small silver mining camp. You will get to see more cattle along way, springs and some of the prettiest views in Nevada the silver state as we conquer the Stillwaters. The giant stone ruins which stand about two stories tall was said to be the courthouse others say it was the mill. Locals in the area say La Plata had either but according to our history books the foundation with the fireplace was a miner cabin and the ruins where the crossroads meet is the courthouse which was built after La Plata's original wood courthouse was simply to small. Sadly when the ore was exhausted and other booms occurred in the Stillwater Range the town was abandoned leaving nature to consume this narrow little canyon where only a few stone walls and fence post today remain. This is one hell of an adventure with some music and a gallery at the end of it. Please note I made one error in my video and mispronounced the Alpine Clan Mountains calling them Iron Clad and Alpine Clad my apologies wrote it down wrong in my notes it happens!

Time Passing By by Audionautix is licensed under a Creative Commons Attribution license (https://creativecommons.org/licenses/by/4.0/)
Artist: http://audionautix.com/ 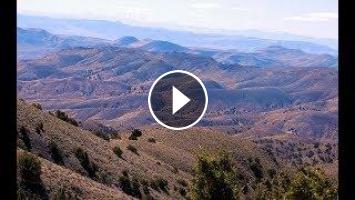 The journey picks up with us leaving Mountain Well as our next destination would be the ghost town of La Plata. Our trek would be intense we would cli...