Paranormal Investigation in the Suite where Nikola Tesla lived and died. This is Part 2 from my time at the New Yorker Hotel. Spirit Box Sessions, shadow figures in movement captured. Door handle being moved when no one is around. EVPs, voices through spirit box and ghost box sessions, and more. Check it out!

This is part 2 of my time at the New Yorker Hotel back in January 2017.
I will spend 3 nights at the Hotel in the Nikola Tesla Suite. The first 2 nights I stayed in the
Tesla Room portion where he died. This video documents my first day and night as a guest there.

I will do several Spirit Box sessions and use paranormal devices to detect EMF, and Shadow. As well as, Audio and Video devices to document anything anomalous I may capture.

Through the Geobox I will capture a voice similar to what Nikola’s voice sounded like when comparing to the one audio recording of him speaking I have heard.

The name Nikola is said in different sessions that took place that night. Even “Tesla’s Room” was spoken. My first name is said a few times, even my last name at one point.

There was a lot of spirits that came through and it would appear they like to hang around the hotel. Some of the spirits were engaging and interacting with me. Many of the conversations were just amongst each other and at times they seemed to be random voices.

A side window in Tesla’s room generated some of the highest EMF I had ever experienced. It started to affect me to the point I did get a slight headache. I thought perhaps Nikola’s spirit was hovering around that window area. Possibly it is a spot where he gazed over New York City in thought for many years.

One of my Ghost Box Apps morphed from voices into a sequence of tonal sounds that seemed to form a pattern. This had never happened before. At one point it began to play a hypnotic rhythm that pulled me in. And I ended up riffing drumming improvisations off of it.

I did capture a few EVPs in the room, most of which sounded like female voices. I would hear bangs coming from Tesla’s Office room, which no one was staying in while I was there. Also the door handle to my room would get jiggled through the night. I would check, and no one would be seen outside in the hallway.

The coolest thing captured visually took place that night while I slept. I had a static camera recording the room in the dark. Two different instances of a shadow figure in movement were documented that I will share with you.

There is more on the way from my time at this Hotel in the Nikola Tesla Suite and my channel keeps growing with explorations into the supernatural in some of the most haunted places in the US. So, make sure you subscribe.

A My Haunted Diary Production
A Film by James Edward Garcia
Production music by www.epidemicsound.com (http://www.epidemicsound.com/)
Some sound effects from Apple Final Cut.
Opening & Closing Theme Music as well as some other portions
of this film composed, performed, & recorded by James Edward Garcia.
Pics and information gathered off Internet used in History Section. 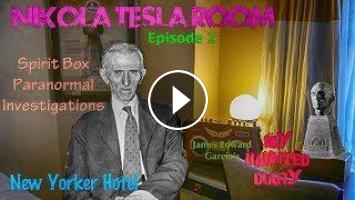 Paranormal Investigation in the Suite where Nikola Tesla lived and died. This is Part 2 from my time at the New Yorker Hotel. Spirit Box Sessions, sha...