Paranormal Investigation in the Suite where Nikola Tesla lived and died. This is Part 3 from my time at the New Yorker Hotel. Spirit Box Sessions, EVPs, EMF, shadow movement, Poltergeist activity captured on film. The voice of Nikola Tesla through Spirit Box and as a Disembodied Voice, plus more. Check it out!

This is part 3 of my time at the New Yorker Hotel back in January 2017.
This is my 2nd day and night staying in the Tesla Room portion where he died. So, if you have not watched Part 1 or 2, you may want to go back and watch those first.

I explore the 2nd floor Mezzanine level where the Grand Ballroom resides and the 3rd floor where there are many conference rooms. The 4th floor up through the teens are off limits and cannot be accessed.
They still use floors solely for Unification Church members. There are also floors that are still left in an abandoned state for possibly decades.

I get back to doing Geobox sessions and get some interesting interaction. As usual, my name is said many times. There are also moments where the voice that comes through the spirit box sounds like it could be Nikola Tesla. At one point I call out Nikola and a voice reply of “yes” is spoken. It sounds like an older man with a slight accent like Nikola’s.

Banging and knocking in the room keep occurring. I try to interact with the sounds and as I was getting ready to stop the camera a disembodied voice of an older man with an accent speaks. Again it sounds like that same voice that came through the spirit box and I think it was Tesla.

I do a live unique ITC Session in the room with several Spirit and Ghost Box devices going at the same time. It was my Radio Spirit Box Party in honor of Tesla. It was loud, and the room was energized. I do not try and figure out everything that was said with text on the screen. I did not want to interrupt the flow and just leave it to the listener/viewer to have the own interpretative experience. Luckily there were no guests staying in rooms by my area because I am sure they would have freaked out. Make sure you check that out. There was an anomaly that passes me from the bathroom and disappears into the bed where EMF was present. I repeat that clip moment after the session is over.

Lastly, I have a static night shot infrared camera film the room while I sleep. I capture some sounds and voices, but the best part was the visuals. One is a shadow that reflects on the TV screen. The TV was off, and it was not some outside interference from an already curtained window. The 2nd one was Poltergeist activity that wakes me from my sleep. And... you get to see it on film. I get chills every time I look back and you do not want to miss this.

There will be one more episode from my time at this Hotel. But this time I will be in the Nikola Tesla Study. And my channel keeps growing with explorations into the supernatural in some of the most haunted places in the US. So, make sure you subscribe. 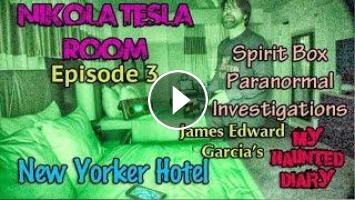 Paranormal Investigation in the Suite where Nikola Tesla lived and died. This is Part 3 from my time at the New Yorker Hotel. Spirit Box Sessions, EVP...