Paranormal videos! Real ghost activity caught on tape confirms local ghost stories at haunted Dead Man's Hole! This video could make you believe in ghosts and spirits! Dead Man's Hole is a real haunted sink hole near Marble Falls, TX. The ghost stories involve the seventeen bodies that were found in the sink hole. Some were union soldiers from the Civil War and some were real life murder victims. Locals think there are multiple ghosts and spirits! People claim that there is an energy vortex at the site. People report rocks being thrown and ropes pulled down into the cave from below.This video takes place on a rainy night. As you will see, we were puzzled by creepy unexplained light orbs. In addition, we caught a Class A EVP of an angry spirit, foot steps, and a rock being thrown. This was one of the most scariest investigations I've filmed in Texas. Of course, I still had to hunt the ghosts down! Are there real haunted places and is this one of them? Are the ghost stories true? Watch and find out and make sure to come back Friday for the premiere of Dead Explorer Ghost Rewind! 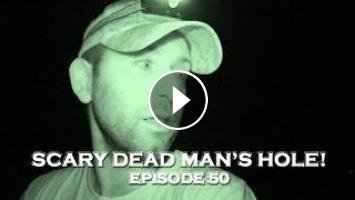