SAGINAW, MI -- Prozak presents an exclusive showing of "A Haunting on Hamilton Street" on October 29 and 30 8pm both nights at the Temple Theatre. This paranormal investigation surrounds three locations on Hamilton Street in Saginaw, MI. With one location so active an Exorcist had to be flown in!

Brian Harnois of Ghost Hunters/Ghost Hunters International joins an investigation team who filmed over 760 hours in Old Town Saginaw, known for its violent and lawless past, may be one of the most haunted places in the United States. The disturbing evidence unfolds as investigators spend an astonishing 24 months exploring prohibition-era tunnels, a former mortuary and a hotel/saloon inhabited by malevolent demonic entity. Viewers will witness one of the most thorough paranormal investigations ever conducted!

Each evening includes a Meet and Greet/Autograph signing hosted by Brian Harnois of Ghost Hunters/Ghost Hunters International and Hip Hop/Rap artist Prozak, and a lecture by Father Andre Calder, Paranormal Research/Exorcist (as seen on) Paranormal State.

"Maybe bringing these tales into further light adds to the history and mythology of the Old Town area... but I think the most important thing this film could do is get people asking questions."
-Robert Martin, Editor in chief (Review Magazine)

Tickets went on sale to the general public on October 11 at 8:00am and are $13 in advance and $15 at the door. Tickets can be purchased by calling 877-754-SHOW, online at HYPERLINK "http://www.templetheatre.com" www.templetheatre.com or in person at 201 N. Washington Ave., Saginaw.
The Temple Theatre is located at 201 N. Washington Ave. in Saginaw. Box-office hours are Monday - Friday 8am to 6pm and Saturday 9am -- 5pm. As always, there will be free parking and shuttle service from the Saginaw Tower, 515 N. Washington, two blocks north of the Temple. 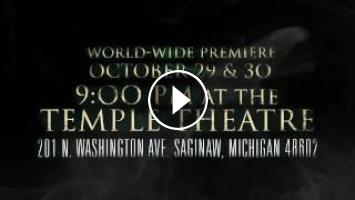