Welcome to ground zero what once was open lush ranch land and a large bustling town has been erased from history. Today its merely a jungle filled with vegetation, thorns, snakes, ticks and heavy foliage. Not much remains today of the town but the saw mill, few wood boards, cemetery and a few trees planted by the towns founder. But at one time a massive 17 room mansion sat in this clearing surrounded by the town. Purissima named by the Spaniards translated Purest has hundreds of years of history. The Ohlone tribe had a village on the creek near where the ghost town is today. When the Spaniards landed in nearby San Gregorio Beach they had an encampment here before they moved on to discover the bay. When the town was growing in the 1850's squatters came here in large numbers taking the land from the Spanish who had a large ranch which served the mission. Henry Dobbel formed the town which had restaurants, hotels, post office, train station, oil wells, plantations, blacksmith, school, church, dance hall, town cemetery, springs and many stores. Over the years many of the towns prominent folks had died, crops failed, railroad no longer operated and floods plagued the town leading to its demise. Some may theorize that Purissima was cursed from its early beginning just ask the dearly departed who came here and never left! The last time I was here someone stole my camera my second time visiting here I was severely injured Purissima has a way of picking you apart and testing you! This is a strange place I have found strange dens, skulls, giant mountain lion tracks and have noticed that thousands of birds consume this place. 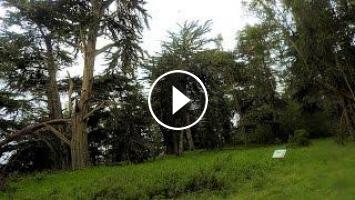 Welcome to ground zero what once was open lush ranch land and a large bustling town has been erased from history. Today its merely a jungle filled wit...