Annabelle was the focus of a case that famed paranormal investigators Ed and Lorraine Warren took part in during the early 1970s and is highlighted in the book The Demonologist. It has been stated that this is one of the most unusual cases of a possessed object on record.

In 1970 a mother purchased an antique Raggedy Ann Doll from a hobby store. The doll was a present for her daughter Donna on her birthday. Donna, at the time, was a student in college, preparing to graduate with her nursing degree and resided in a tiny apartment with her roommate Angie (a nurse as well). Pleased with the doll, Donna placed it on her bed as a decoration and didn't give it a second thought until a few days later. Within that time, both Donna and Angie noticed that there appeared to be something very strange and creepy about the doll. The doll apparently moved on its own, relatively unnoticeable movements at first, like a change in position, but as time passed the movement became more noticeable. Donna and Angie would come home to find the doll in a completely different room from which they had left it. Sometimes the doll would be found crossed legged on the couch with its arms folded, other times it was found upright, standing on its feet, leaning against a chair in the dining room. Several times Donna, placing the doll on the couch before leaving for work, would return home to find the doll back in her room on the bed with the door closed. 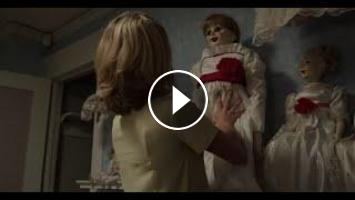