Every year we investigate on 102.7 KISS FM on the Halloween LIVE broadcast for 4 hours.

5/9/2011 - Los Angeles Residential Investigation IR camera: Marcus was investigating a closet where an apparition of a girl was reported to enter. In addition, it was reported that the door would move by itself and the light inside the closet would turn on and off, even though the socket is broken and no light bulb is present. In the video, Marcus reaches up to pull the light switch and the door appears to close behind him. While in there, he said he heard a small shuffling sound. After exiting the closet, he requests for the door to move again, which doesn't. After reviewing the footage, he realized that the door had moved a lot more than he thought at the time. Our team of investigators tried to recreate the movement of the door by pulling from the inside and the top of the door. Due to the weight of the door, the angle, and the height of the carpet (high pile), we were unsuccessful in our attempts.

At 0:58, a round light source is seen going from the location of the door (once it stops moving) to top left of the screen.

Paranormal EXP, co-founded by Marcus and Clare and is a team of paranormal investigators/researchers based out of Los Angeles, CA. The team uses various technology, methodology, skills and life experiences to disprove or validate each case. Taking a scientific and logical approach to investigating, the continual findings of ‘unexplained phenomena’ is the driving force behind Paranormal EXP. 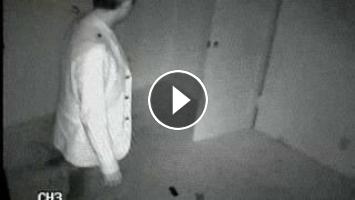