A two-year-old boy was rescued from the streets of Nigeria. He was kicked out of his home after his family accused of him of being a witch. For eight months, the toddler wandered the streets alone, surviving on scraps. The emaciated child, whose stomach was riddled with worms, was found by Danish aid worker Anja Ringgren Lovén, who offered him biscuits to eat and fed him bottled water. Her act of kindness was captured on camera and that image has circulated on social media and news sites around the world. Anja then wrapped the frail child, who she’s called Hope, in a blanket and took him to the nearest hospital. After a blood transfusion and treatment to get rid of the worms, Anja brought him into the African Children’s Aid Education and Development Foundation – a safe house for children she founded with her husband.
"When we heard that the child was only 2 to 3 years old, we did not hesitate," Lovén told Huffington Post UK. "A child that young cannot survive a long time alone on the streets. We immediately prepared a rescue mission."

At the time of his rescue, the skeletal child was in critical condition, said Lovén, founder of the African Children's Aid Education and Development Foundation (ACAEDF).

“Thousands of children are being accused of being witches and we’ve both seen torture of children, dead children and frightened children," she wrote. "This footage shows why I fight."

Belief in witchcraft is widespread in parts of Africa, according to United Nations Children's Emergency Fund (UNICEF). In 2010, the agency warned that a growing number of adults and children were being accused of witchcraft, leading to killings and shunning.

Those most at risk, UNICEF noted, were boys who displayed a "solitary temperament, physical deformities or conditions such as autism."

"Many social and economic pressures, including conflict, poverty, urbanization and the weakening of communities, or HIV/AIDS, seem to have contributed to the recent increase in witchcraft accusations against children," UNICEF Regional Child Protection Adviser Joachim Theis said. "Child witchcraft accusations are part of a rising tide of child abuse, violence and neglect, and they are manifestations of deeper social problems affecting society."

A British documentary about child witch hysteria said exact figures were hard to come by, but estimated that in the southwestern Nigerian state of Akwa Ibom — where the toddler was recently rescued — there were about 15,000 children who had been labeled witches and abandoned on the streets.

Lovén said she decided to call the rescued boy "Hope," and she requested donations to help pay for his hospital bills.

In only two days, she subsequently reported, more than 1 million Danish kroner (or about $150,000 U.S.) had been donated to help the little boy.

"With all the money we can besides giving hope the very best treatment now also build a doctor clinic on the new land and save many more children out of torture!" she said. "It's just so great!"

Days after the boy's rescue, Lovén wrote on Facebook that Hope's condition had been upgraded to stable. He was receiving a daily blood transfusion to improve his red blood cell count, but he was still suffering from worms that were "giving him some pain," according to Lovén.

Despite the difficult recovery, Hope had begun eating, she noted, and had the power to sit up and smile.

Over the weekend, Lovén posted photos of the boy looking noticeably healthier and heavier, particularly in his cheeks. He was even photographed with a smile.

"Hope is getting so much better," Lovén wrote. "Already gaining a lot of weight and looking so much more healthy. Now we only need him to talk.

"But that will come naturally when he is out of the hospital and starting his life among all our children." 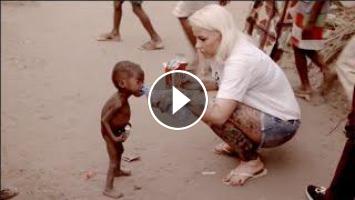 A two-year-old boy was rescued from the streets of Nigeria. He was kicked out of his home after his family accused of him of being a witch. For eight ...