Born Ninel Sergeyevna Kulagina on July 30, 1926 in Leningrad, Nina was very much an average, tough Russian woman. She was loyal to her country, joining the tank regiment of the Red Army during World War II when she was only 14. After the war, she married and became a housewife, living what anyone would describe as an average life until she began to test if the psychic abilities of her mother might have rubbed off on her.

It was during Nina’s private attempts at developing these psychic abilities that she seemingly unlocked something within her. The most well-known of these alleged abilities was psychokinesis (PK), or the moving of objects with the mind. Nina could move a wide variety of items including clock pendulums, crystal bowls, matches, cigarettes, compass needles, bread loaves, salt shakers, and many other small objects (often placed in Plexiglass boxes to show there were no strings attached). She first became aware of this ability when things would move whenever she would get angry. And aside from her famous stopping of a frog’s heart, Nina performed another fascinating feat: she separated an egg. That might not sound so amazing until you know that the egg was floating in a salt water tank two meters away from her. And she brought the yolk and white back together again when instructed to do so.

At the First Moscow International Conference of Parapsychology in 1968, footage of Nina seemingly moving objects with her mind was finally shown to the public. But with the scientific community catching wind of Nina’s astounding feats came the heavy hand of scrutiny. Skeptics including James Randi have long maintained that none of Nina’s apparent psychic abilities were anything more than common trickery and sleight of hand illusions. Just like Uri Gellar, Nina’s publicized experiments were never under ideal laboratory conditions. She was seen at home or in hotel rooms, without experts in trickery on hand. It’s been claimed that Nina had magnets implanted into her body to manipulate objects; other telekinetic claims could have employed the use of thin wires or mirrors. Yet in the USSR, laboratory experiments were performed on Nina (under the pseudonym Nelya Mikhailova) by several researchers, including Czech psychical researcher Dr. Zdenek Rejdak, psychologist B. Blazek, physicist V. F. Shvetz, Dr. J.S. Zvierev, physiologist L.L. Vasiliev, and the aforementioned Dr. Sergeyev. Dr. Rejdak published a report of his experiments (titled ‘Nina Kulagina’s Mind over Matter’) in the June 1971 issue of Psychic Magazine.

It has been argued that Nina was shown off by the USSR in an effort to make it seem like they were making huge leaps in telekinesis when in fact it was all fakery. But even though the Cold War has long since ended, Russia has continued to keep many of its secrets under lock and key. If Nina was such a glowing success, where are the scientific reports? Might they still be housed somewhere in a storage room never to see the light of day? As is the case with so many things, just because we haven’t seen something doesn’t mean it doesn’t exist.
Near the end of her life, Nina seems to have lost the abilities she became so famous for. Her exertion in manifesting these powers was blamed for a near-fatal heart attack in the late 1970s. Sharp pain in her spine, dizziness, blood sugar irregularities, failing eyesight, and many other health concerns plagued her. With deteriorating health, Nina stepped away from the endless scientific testing, conducting very limited experiments in labs up until her death in 1990. And so, the full truth died with her. Whether or not she ever possessed remarkable abilities, perhaps faking it when her powers disappeared later in life, is a matter of speculation.

What do you think? Was Nina Kulagina a deliberate fraud, a Cold War pawn, or genuine enigma? 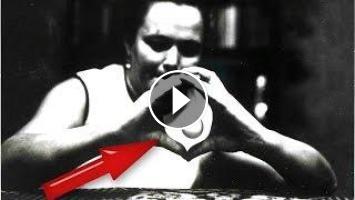 Born Ninel Sergeyevna Kulagina on July 30, 1926 in Leningrad, Nina was very much an average, tough Russian woman. She was loyal to her country, joinin...