Journalist Laura Didio of "My Amityville Horror" comes on Paranormal Kool-Aid (Dead Air Paranormal Radio Show) 10/23/13 to discuss her involvement and discovery surrounding one of the most famous Haunted Houses in the World, The Amityville Horror House. This discussion covers "Fact or Faked" information surrounding the 28 days the Lutz family resided in the house as well as the homes past history and Laura's interviews with Hans Holzer, Father Ray Pecoraro & Ed and Lorraine Warren.
In December 1975, George and Kathy Lutz and their three children moved into 112 Ocean Avenue, a large Dutch Colonial house in Amityville, a suburban neighborhood located on the south shore of Long Island, New York. Thirteen months before the Lutzes moved in, Ronald DeFeo, Jr. had shot and killed six members of his family at the house. After 28 days, the Lutzes left the house, claiming to have been terrorized by paranormal phenomena while living there.
Dead Air Paranormal Radio Show bringing you the Best in Paranormal News and Entertainment Nightly @ http://www.blogtalkradio.com/dead-air Check our Show Page or Facebook Feed for Guest Information and Showtimes. https://www.facebook.com/pages/Dead-Air-Paranormal-Radio-Show/215520285135828?ref=hl 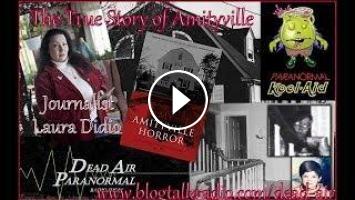