We sometimes find some strange things just lying around. How many of us have stumbled across a strange object lying abandoned, sometimes even something of value? These are the little discoveries that pop into our lives from time to time, and mostly we just shrug our shoulders and get on with our day. Yet sometimes there are things uncovered that go beyond the merely odd, to catapult themselves firmly into the realm of the truly bizarre. Such is the case of a strange wooden box found discarded in a dumpster, which held all manner of unexplained oddities and anomalies, and has gone on to become a much-discussed unexplained mystery.

The whole strange tale ostensibly starts in 2013, when a man named Dan Wickham came forward and claimed that his friend had found something rather strange in a dumpster in Asheville, North Carolina in 2008. There lying amidst the trash was a worn out old handmade wooden box measuring roughly 29″ by 38″ and with hinges, a metal handle, and locks on it, the whole of it purportedly smelling like “basements and dampness.” There were no markings on the exterior and it was largely unremarkable for the most part, something most people probably would not even have noticed. A check of the lock showed that it was secured, and after a few moments of debating with himself on whether to leave it where it lay or not curiosity won out and he took it home to try to see what was inside. It would turn out to be far stranger than he had ever imagined, to the point where he would send it to Dan to see what he thought.

When Dan received the box he opened it to find what he called “a whole box of crazy” within. There within the box were stacks and stacks of papers containing a mixture of typed text and scrawled handwritten notes, as well as reams of diagrams, drawings, and indecipherable geometric designs that were outlandish to say the least. One type of drawing found within were those of all manner of fantastical and at times nightmarish creatures, in particular biblical creatures from the book of Ezekiel, as well as numerous depictions of angels and four-headed seraphs with double sets of wings, humanoid creatures with the heads of animals, flying dragon-like creatures, and various other strange beasts or aliens that are hard to really categorize. There are also sketches of nude people and other things, and while most of it displays great artistic skill in a variety of styles there are also childish scribbles and stick figures scattered about.

The Mystery of the "Box of Crazy" Found in a Dumpster-the top mystery of reddit, the mystery box 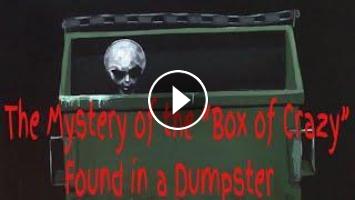 We sometimes find some strange things just lying around. How many of us have stumbled across a strange object lying abandoned, sometimes even somethin...