Tierney's has been a mainstay in the ever-changing landscape of Montclair since 1934. We applaud the family for maintaining the integrity of this tavern. It's the kind of establishment that is becoming increasingly hard to find in the world we now live in.
While whispers and voices have been heard throughout the building, the majority of the activity tends to occur after hours. The bartenders on the main floor often hear footsteps on the second floor long after the building has been locked. The distinct sound of bottle caps hitting the walls or floor is quite common, yet none are ever found by the clean up crew.
Jim told us that he recently felt the presence of William Tierney for the first time. This happened while the brothers were joking around and imitating their grandfather.
A couple of the employees have also reported seeing a shadow in the downstairs bar. Its probably no coincidence that the seat Weird NJ has dubbed "The Death Chair" is nearby.
Sadly, a gentleman by the name of Finn Tracey suffered a massive heart attack while watching the Super Bowl at the bar. Many patrons in the crowd tried to resuscitate him. It was even said that he was brought back, but then passed later in the ambulance.
Finn was a legendary Seton Hall Basketball coach from 1948-1977. He was also a regular at Tierney's back in the 1970s to early 80s. It's said that he always sat in the same seat by the jukebox on the main floor. Though stories vary, his wife Evelyn's obituary states that he passed in 1982.
The main focus of our investigation was to determine if any of the recently departed friends of the bar were responsible for the heightened activity they have been encountering.
While some of the names and events have been kept confidential, we can safely say that this is very much the case. In particular, we had a very interesting session with both the REM-Pod and the P-SB7 Spirit Box.
I don't mind mentioning that the group was very much at odds with some of the more intense interaction we met with and did our best to try and debunk it.
This goes for a rather powerful visual we caught as well!
In retrospect, I guess its no coincidence that Kate's name came up on the Ovilus while we were demonstrating some of the equipment we were planning on using during our investigation. It would not be the last time she would make her presence known. Without giving too much away, you will see a few common threads unraveling throughout the footage.
This investigation turned out to be quite touching and very personal. We had many shared experiences and a good deal of intelligent spirit interaction.
One of the greatest things to come out of the evening was the effect it had on those involved.
Fortunately, nothing malicious has ever been felt here. Actually it's quite the opposite. It seems the spirits that loved this place and the friendship it has offered over the years have simply chosen to stay.
I think Jim Tierney said it best - "Tierney's has been revered and loved for many years, many generations." I suspect it will be for many years to come.
We'd like to extend a Thank You to everyone at Tierney's for so generously welcoming us into their world and sharing their stories with us. The Tierney family has a remarkable place filled with friends and loved ones past and present.
And a Huge Thank You to Mark Sceurman of Weird NJ for bringing us all together!

Thanks for watching!
Robert 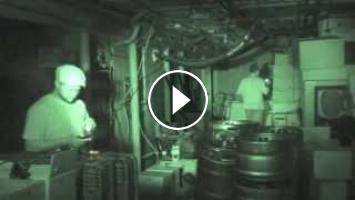 Tierney's has been a mainstay in the ever-changing landscape of Montclair since 1934. We applaud the family for maintaining the integrity of this tave...