The Top 5 Twitch TV Fails and Funny Moments from the last year. The best awkward livestreamfails and twitch mistakes.

Mom's Twitch Debut* TSM_Bjergsen
Bjergsen is a professional League of Legends gamer and Twitch livestreamer. One night his mom comes in to tell him goodnight. Unfortunately, she doesn't know that he's in the middle of a Twitch stream, and also, unfortunately for her, she's not really wearing many clothes.

Burning Down The House
A Japanese Minecraft streamer decides to demonstrate to his online audience his cool new oil match.
What follows is basically a twitch fail example of everything you should NOT do in a fire.

AndyMilonakis* Nicorette No Sale
Now, this clip isn't really a Twitchfail by Andy, but more of a livestreamfail by a CVS pharmacy where a clerk refuses to sell Andy Nicorette gum. She won't believe that he is old enough to purchase the product, even though he presents perfectly valid legal ID.

Knock Knock
Now for a while there was a great prank that was circulating around Twitch TV. Basically Twitch trolls would post a link to a file that would play VERY realistic sound effects that sounded like someone knocking on a door or window. Now alot of Twitch streamers fell for this troll creating some great funny twitch moments and internetfails.

BattleAthlete*Roach Shoulder
Battle Athlete is a former US Marine streamer on Twitch TV.
In this twitchfail, the former marine doesn't seem so tough when he *completely* freaks out from a cockroach and his girl isn't much help either. 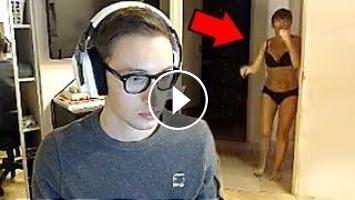