This portion is being provided as a courtesy from Veritas Radio. To listen to more of this exclusive interview proceed to http://www.veritasradio.com

"I, Robert Merrill Stanley, am currently of sound mind and body and have no intentions of taking my life. This rather dramatic declaration regarding my mental and emotional state is directly due to the extremely dangerous nature of my current journalistic project: an exposÃ© of the genocide, murders, mind control and multiple suicides that have occurred in my hometown of Malibu, California."

For those who are not familiar with the cosmology of the Chumash Indians they were aware of the fact that there are three different worlds that communicate with one another. The beings from the Upper World are benevolent and rarely interact with humans. However, in stark contrast, the beings from the Lower World are malevolent and often attempt to harm humans at night by entering our domain, which is the Middle World. From 1542 to 1776, when the Spanish stole the land from the Chumash and committed germ warfare with smallpox, plague, typhus, measles and venereal diseases, that was a crime against humanity. However, in 1824, after establishing the Roman Catholic Mission System, the Spanish, priests killed half of the Chumash Antap Priests in cold blood, and drove the rest into hiding, and then outlawed the Chumash religion. That was a crime against the Cosmos. As a result, the balance of the Three Worlds was lost and a doorway to the Lower World in Malibu was left unguarded. Mankind has been suffering the consequences ever since because the Antap Priests were the guardians of the Middle World. ) am not sure how they did it, but they maintained the balance of the Three Worlds.

Robert Stanley has amassed an amazing amount of news reports regarding the mind control, murders, suicides and cancers that have occurred in Malibu. 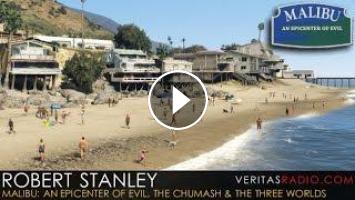