Spending the Night locked in Waverly Hills Sanatorium. Will we experience any phenomena? Will we survive whatever we encounter? Check out Part 1 from our all night explore and investigation into this well-known haunted location.

This is part 1 of Martie and I spending the night exploring and investigating the large gothic surviving building known as the Waverly Hills Sanatorium in Louisville Kentucky.
We had been to this place before but for the Haunted Halloween attraction.

But this time the haunted experiences would be real without the distraction of hundreds of thrill seekers looking for a staff prepared scare. And we would spend the entire night locked in the place.

A Sanatorium is a place mostly known for the treatment of Tuberculosis a century back. Unfortunately, treatments were experimental, and many did not survive. A cure was found in the late 1940’s. An antibiotic named Streptomycin would be administered over the next decade, and Sanatorium’s would become a thing of the past.

I will showcase a brief history on Waverly Hills and some of the known hauntings in this video.
But the amount of paranormal activity experienced and captured in this place includes shadow people, apparitions, disembodied voices, getting scratched. The full gamut of what you can expect from a haunted place.

I did not enter subtitles in the video to save on time. So, it may not always be clear as to what was said.

We started our investigation at night from the bottom up. So, the first stop was the Death Tunnel where we heard loud bangs, captured EVPs, heard disembodied voices. They put plastic wrap to cover the end of the dark creepy tunnel and the plastic moved as if it were breathing.

We head to the 1st floor and go into the Morgue, where I laid in a body slab. At one point we could clearly hear squeaking metal within the unit. There were autopsy tables and a sink as well.

Next, we went through the area that was converted into a Haunted Attraction where there were lots of scary faces looking back at us.

Keep in mind, other than the Death Tunnel where I used a camera flood light to film, we were in complete darkness. I had 2 camera’s running simultaneously on a rig I carried. One was in infrared, the other was in full spectrum. I used infrared emitters to film in darkness. But to our eyes we could not see this. So, it was tough getting around without some small flashlight at times.

The place started to get to Martie and being empathic she picked up a lot of ill feelings and hopelessness. Once we moved up to the patient rooms and rehabilitation area’s starting on the 2nd floor we would have to take breaks out in the open solarium, so she could get fresh air, and her strength back to continue.

We would hear and capture lots of EVP’s and hear voices all around us. The spirits seemed to be quite active that night.

This episode ends while we were almost ready to move to the 3rd floor. Make sure to check back for Part 2, the final episode where I capture a full body apparition down the hallway of the 2nd Floor that neither of us saw.

There is more on the way from our time investigating Waverly Hills Sanatorium through the night and my channel keeps growing with explorations into the supernatural in some of the most haunted places in the US. So, make sure you subscribe. 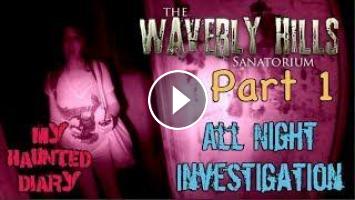 Spending the Night locked in Waverly Hills Sanatorium. Will we experience any phenomena? Will we survive whatever we encounter? Check out Part 1 from ...