When paranormal investigators seek to solidify eyewitness and media claims of a haunted funeral home, they uncover more than they bargained for: disturbed burial grounds, hostile and territorial entities, and a murderous past.

Broken equipment, personal injury and terrifying encounters with the unseen become all too common as the investigators attempt to communicate with the dead. Join the Seekers as they embark on a journey, which takes them back to the very origin of Hamilton Street and the site of Fort Saginaw - the cities first point of civilization.

In 1962, the Saginaw Road Commission accidentally unearthed an ancient, Indian burial ground below Hamilton Street.
Hundreds of bodies were processed at the Benjamin Mortuary, including some of Saginaw's most prominent figures of the past.
Historians concur: the atrocious injustices and thousands of untimely deaths (due to malaria and territorial murders) could very well set the tone for paranormal activity in Old Saginaw City.
This Red Carpet Event SOLD OUT last year, so get your tickets early!

Online tickets for this event will be available until 6 hours prior to show time. At that time, tickets may be purchased at the Box Office, or by calling 877.754.SHOW. 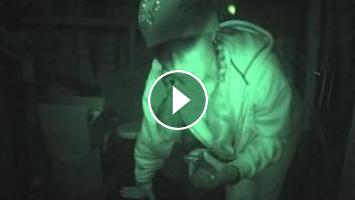 The makers of *A HAUNTING ON HAMILTON STREET 2* take Z93 WKQZ on a ghost hunt at the Stable in Saginaw, MI! The Stable, formally the Benjamin funeral ...