I did a 5 day 4 night camping trip by myself at [a location in Lugerville Wisconsin]. It was slow at first. I was not picking up anything with the thermal [recorder], not even rodents or other animals, as if the woods around me were devoid of life.

The 3rd night I had a feeling of being watched so I stayed close to the truck and set up the thermal to watch the tent. Nothing came around the tent.

On the 4th night things started to happen. A thrown rock or piece of wood came very close to my tent and hit a tree with a very loud thud-pop. I got out of the tent and panned around with the thermal, which was running already outside the tent. It was on a tripod aimed down a trail off the [main dirt road]. It looked like nothing was out there.

After about an hour of panning around with the thermal I stood back up and stretched. I aimed the thermal to watch the walking trail, and then I started to go back into the tent when I heard the sounds of brush cracking on both sides of me. This was so close to me that it made the hair on my neck bristle instantly.

I started to pan with the thermal again from one side to the other. After what seemed like about a half hour into it, a bright thermal heat signature of life appeared in the background. It was some kind of animal along down the walking trail. It seemed to be on the edge of the trail and low to the ground.
It was pitch black in the forest, so my only ability to observe this animal was from the recorders small screen

After I watched it for a while on the thermal recorders screen, I got the sense that it was watching me also, and it was peeking over a clump of brush on the edge of the trail. I watched it for a while. Startled by movement in brush to my right, I accidentally kicked into my bag of cans and garbage, bumping into the tripod, which jerked the thermal to the right a bit. Then the blip stood up and ran off on two legs, hunched over.

I could hear it as it ran away from me to the north. the sounds of brush and its footsteps fading into the distance.
As the sound trailed off from this fleeing intruder, all around me the brush started to thrash and snap, I first heard loud snaps of branches to my left and panned the thermal to see in my panic, then more sounds to my right and behind my tent.
I continued to pan around me but saw nothing. The edge growth was so thick on the sides of this overgrown road that the imager could only see in 10-15 feet or so.

Something was back in that brush, on both sides of me. There was at least two of them, and they both got noisy at the same time as if trying to get my attention so that I would not follow the one that was fleeing away. I couldn't see the ones to the side through the thick brush. I looked for a while, but then gave up trying to see them that way. After the noises faded, I turned the thermal recorder at the tent, and set it up to record all night, then I would attempt to go and sleep.

I went to sleep with the thermal aimed at the tent. I could hear things to the sides of the road for a while sneaking about.
Although nervous, I could only hope they would come closer to the tent for the thermal to capture them up close, didn't happen though, so I drove home in the morning to review the footage that I was sure I got.

I watched it on the computer when I got home. It looked like a bipedal to me, (Possible Sasquatch I thought!)
It was peeking over brush for a while, and moving strangely, then scurrying away, hunched over, like it was dodging a sniper. Its actions where somehow like it knew I could see it, or spooked by the noise of that bag of cans I kicked by accident.

It was no bear, or other four-legged animal. It was bipedal and it was agile.

When I shot this footage it was almost 100% pitch black outside. There was no moon. So this thing has the ability to run through the dense brush in total darkness, and watch me in total darkness.

I got the impression from the video that it had long arms and big hands and very muscular legs. It doesn't look very large.
Perhaps it could've been a juvenile. It seems to have that curious spirit to its movements.

The other ones that made the noise around me may have been young ones also, or adults protecting the visible youngster from my possible threat.

The other cameras (trail cams) I had set up around my camp area picked up nothing. I did not have a light on or any lantern nor fire, It was a cold camp with no camp fire the entire stay.

It was total darkness out there. The trees had a thick canopy over the trail like forest road. It blocked out any night sky. Without the thermal I could only see darkness.

The following footage is the actual uncut version of that frightful night filmed by D.B.Young. 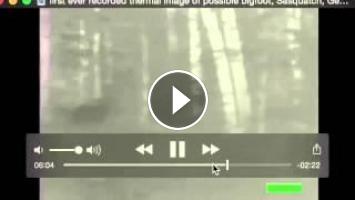