Hey guys! Here is some unseen footage from Eric(Epic Investigates on YouTube) and I! This was from before we went to the Chickamauga battlefield! We came for the tour, and ended up catching some interesting things on film!! Let me know what you think!

From Wikipedia:
Tunnel Hill is a town in northwest Whitfield County and southern Catoosa County, Georgia, United States. It is part of the Dalton Metropolitan Statistical Area. The population was 1,209 at the 2000 census. The town is named for the Chetoogeta Mountain Tunnel, a 1,497-foot (456 m) railroad tunnel built in the late 1840s.
The community was first known as Doe Run. It was incorporated on March 4, 1848, as Tunnelsville, and changed its name in 1856 to Tunnel Hill. Both names refer to a nearby 1,497-foot (456 m) railroad tunnel through Chetoogeta Mountain, officially dedicated on October 31, 1849 by Etowah steel-maker Mark A. Cooper on behalf of the state-owned Western & Atlantic Railroad.

The railroad tunnel was the first to be completed south of the Mason–Dixon line. The rail line operated during the late 1840s with passengers and freight being portaged over the mountain while the tunnel was constructed. Another tunnel next to it, completed in 1928, is still used by CSX Transportation. The original Chetoogeta Mountain Tunnel is now paved for tourists to walk through; it has even more historic value, as the Great Locomotive Chase passed through it in 1862.

Throughout the American Civil War, the homes around Tunnel Hill were used as part of a major hospital system. Wounded CSA Gen. John Bell Hood was brought to the Clisby Austin House after the Battle of Chickamauga. His leg was buried in a family cemetery near the house. The Clisby Austin House also served as the headquarters for Union Gen. William T. Sherman while he made his plans for attacks against nearby Dalton and Resaca, which became the opening battles of what would later be known as the Atlanta Campaign. The area hosted many engagements and camps throughout the course of the war. These are remembered through an annual Battle Reenactment held in September. 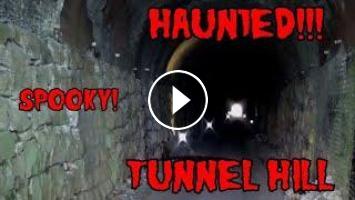 Hey guys! Here is some unseen footage from Eric(Epic Investigates on YouTube) and I! This was from before we went to the Chickamauga battlefield! We c...