Karl & Sam go to scout out Horncliffe Mansion on a pre-investigation before holding a vigil with with the team.

It's very difficult to dig up much information at all on this enigmatic building but we have discovered that it was built in 1869 by a Mr. Henry Hoyle Hardman. Henry was the son of George Hardman, a successful local businessman, who built Oakhill House - RIGHT - now the Rossendale Museum, in Rawtenstall. In view of the fact that Horncliffe House as it was then known was such a grand home, it is clear that Henry was also a successful businessman just like his father and in fact he owned Hardman Mill in Newhallhey which is just down in the valley and practically overlooked by the house. Henry died in 1888 but his wife Emily continued to live there until she died a few years later in 1896. The house passed to Annie Hardman (their daughter?) and she lived there until about 1903. The house and it's contents were then sold to a Mr. Roland Rawlinson who owned Myrtle Grove Mill in Waterfoot.

And now we have a huge gap with no idea who, what or when until we reach the 1960s!

HEAD ON OVER TO ONE OF OUR LINKS ! 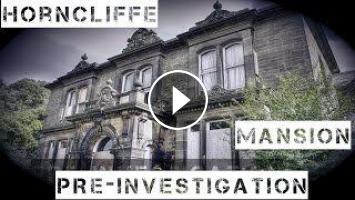 Karl & Sam go to scout out Horncliffe Mansion on a pre-investigation before holding a vigil with with the team. FULL INVESTIGATION EPISODE HERE https:...