Daniel Klaes has had a lifelong interest in the paranormal. Much of his curiosity stems from his experiences living in a haunted house. These encounters with unusual phenomena caused him to push the boundaries of his own belief system. In fact later Dan later purchased his family’s home and has grown comfortable with his unseen guests.

Klaes has co-founded the Greater Western New York Paranormal Society which has tackled some of the most challenging paranormal cases in the region. Dan is also a producer of Behind the Shadows which is a documentary series that can be viewed internationally on the Roku station Paranormal Reality TV. He is also a radio host (Phenomena Encountered) featured on paranormalwarehouse.com, a sought after speaker, and author.

In June of 2015 Dan realized a lifelong dream. The infamous Hinsdale House, site of the infestation and structural exorcism became available for purchase. Wasting no time, he made an offer that was accepted and became the owner. Klaes immediately began renovations to stabilize the house, which continue to this day. Shortly afterwards he opened the location for paranormal research and has hosted local, national and international paranormal teams.
Recently Dan was contacted by producers from Discovery network and contracted the house to be featured on the hit TV series Paranormal Lockdown featuring Nick Groff and Katrina Wiedman.

The Episode was the highest viewed episode of the series. Such was the phenomena that after Nick left both EVP and Geobox evidence called for his return to the house. Nick and Katrina later returned to film a Halloween special at the house that was featured on TLC.
Klaes has been featured on the show Paranormal Lockdown for both season one (Hinsdale House) and season two (Statler Hotel).
Dan with his wife Colleen and their 4 children are lifelong residents of Western New York. All share his interest in the unusual and sometimes spooky endeavors as they present themselves. 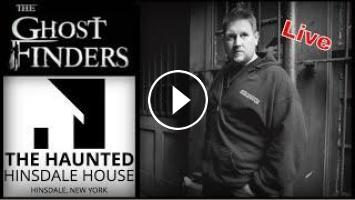 Daniel Klaes has had a lifelong interest in the paranormal. Much of his curiosity stems from his experiences living in a haunted house. These encounte...