Hi Guys!
I hope you enjoyed this video, it was something a little bit different. Thank you again Jesper for requesting it.

If any of you have any requests whether they be reviews, opinions or anything else let me know. You can always contact me via my facebook or in the comments.

740 – 1743: It awoke and started a three-year reign of terror that culminated with the disappearance of over 300 settlers from Derry Township, much like the Roanoke Island mystery.
1769 – 1770: It awoke.
1851: It awoke when a man named John Markson poisoned his family, then committed suicide by eating a white-nightshade mushroom causing him an excruciating death.
1876 – 1879: It awoke, then went back into hibernation after murdering a group of lumberjacks who were later found near the Kenduskeag.
1904 – 1906: It awoke when a lumberjack named Claude Heroux murdered a number of men in a bar with an axe. Heroux was promptly pursued by a mob of townsfolk and hanged. It returned to hibernation when the Kitchener Ironworks exploded, killing 108 people, 88 of whom were children engaged in an Easter egg hunt.
1929 – 1930: It awoke when a large group of Derry citizens gunned down a small group of gangsters known as the Bradley Gang. It returned to hibernation when the Maine Legion of White Decency, a Northern counterpart to the Ku Klux Klan, burned down an African-American army nightclub known as "The Black Spot."
1957 – 1958: It awoke when Dorsey Corcoran was beaten to death by his stepfather, Richard Macklin; Its first known victim at this time was Georgie during one of the floods that hits Derry every few years. It then met its match when the Losers' Club forced It to return to an early hibernation when wounded by the young Bill Denbrough (Georgie's older brother) in the first Ritual of Chüd.
1984 – 1985: It awoke when three young homophobic bullies beat up a young gay couple, Adrian Mellon and Don Hagarty, throwing Mellon off a bridge (echoing real life events in Maine). It was finally defeated in the second Ritual of Chüd by the adult Bill, Richie, Beverly, Eddie, and Ben, though this triggered the collapse of the water tower and flooding of the town. 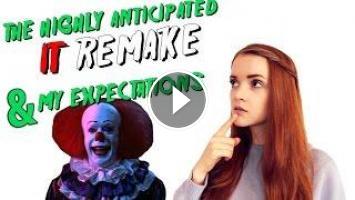 Hi Guys! I hope you enjoyed this video, it was something a little bit different. Thank you again Jesper for requesting it. If any of you have any requ...