A baby astonished doctors in India when it was born with a rare condition known as 'Mermaid syndrome.'
Tragically the newborn, whose legs had fused together to resemble the mythical creature, only lived for about ten minutes.
The 22-year-old mother, from Sahranpur, in Uttar Pradesh, northern India, had the baby, on Friday morning.
Dr Vandana Arya, 35, a gynaecologist at the hospital who delivered the baby, said: ‘I have never seen a case like this before.We have seen congenital disorders amongst children born with deformities, but this was an extremely rare case.
'The baby was born in a fish-like body, and had its hands spread like fins, which made this case even more unique.
'The upper body of the baby was absolutely functional but the lower body was not developed.'A large group of people gathered at at Sahi Ram Hospital for a glimpse of the remarkable newborn.
Dr Arya said the condition meant it was impossible to determine the gender of the baby.
Sirenomelia, also known as 'Mermaid syndrome' is a life-threatening illness, marked by the rotation and fusion of a sufferer's legs.
The rare congenital deformity causes what looks like a single limb, resembling a fish tail, in the womb.Medical historian Lindsey Fitzharris, who has a PhD from Oxford University, previously told MailOnline the condition occurs from a failure of the normal vascular supply, when the umbilical cord fails to form two arteries.
As a result there is not sufficient blood supply reaching the foetus, she said.
The single artery 'steals' the blood and nutrition from the lower body, diverting it back up into the placenta.
Suffering malnutrition, the foetus fails to develop two separate limbs.
The condition is extremely rare, affecting one in 100,000 babies, but is 100 times more likely to occur in identical twins.
Dr Fitzharris added: 'Sirenomelia is extremely fatal.
'There are no accounts of anyone with this condition surviving in the past.
'Most died within days of being born due to kidney and bladder failure.
'Even today, the odds are against those with sirenomelia, though there are a handful of examples of children living past infancy.'
In this case, the woman did not complain of any complication during her 30 week pregnancy.
However, an ultrasound during the last stages of her pregnancy revealed the baby's kidneys had not developed.
This is the fourth case of mermaid syndrome in the world but the first case reported in India.
Dr Vandana said: ‘There are several causes of this condition like excessive medicine intake, a vitamin deficiency, genetics, past history or even maternal diabetes.
'It also results from a failure of normal vascular supply from the lower aorta in uetro.
'The operation in these cases is not possible due to the improper development of the body.
'In some extreme rare cases, the kidneys can be transplanted but the survival rate is very low.' 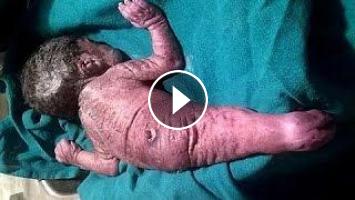 A baby astonished doctors in India when it was born with a rare condition known as 'Mermaid syndrome.' Tragically the newborn, whose legs had fused to...