You may have seen this place on popular shows like the one time Paranormal Challenge hosted by Zak Bagans. A local paranormal team called The Wraith Chasers were in that episode. They later did an investigation at the hospital for their own show called Ghost Asylum. My investigation took place a little after theirs except mine was a solo lockdown, and I’m quite sure I am the first to do one there.

There are claims of shadow people, apparitions of past staff and patients that haunt this abandoned location along with voices, bangs, and poltergeist activity.

Keep in mind, I spent the night there by myself and explored the whole place inside and out. Things got a bit crazy later as I did more investigating and less exploring. So I am breaking this up into three episodes so you can experience all of it.

This episode is part 1 and you will see my first impressions,
getting a brief tour by Stacey who manages ghost hunt events for the abandoned hospital.
You will see me exploring areas of the first floor, along with portions of the 2nd floor including a rocking horse I had a static camera filming.

The hospital opened in 1959 and closed in 2001 when it’s equipment and layout were deemed out dated.
After the hospital closed the new owner used part of the first floor as an Antique shop. The hospital kitchen was reused, for a brief time, as a banquet restaurant. The building owner would store bulk item purchases in the building, like a storage facility, for future profit sales. But for reason he left the 2nd and 3rd floors as they were with hospital equipment, staff items, hospital records, and former patience belongings to decay.
A guy named Jim Edward Paris rented out part of the 1st floor as his living quarters. He had past ties to the military that were deemed top secret. He lived out his last years in the hospital on lots of prescribed medications and dabbled in the occult. He was found dead in one of his rooms at the abandoned hospital.

I did get a little edgy while exploring his area and used some strong language. The guy lived in filth, did not like to wash, and the stench was quite ripe. He was known for being abusive and my provoking kicked in at one point.

Don’t forget to check out part 2 and especially part 3 where some of the more heightened and creepy paranormal events take place. 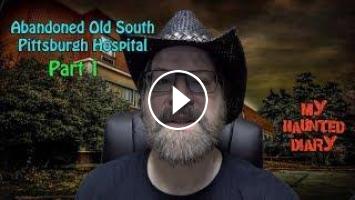