This is part 3 and the final episode of my over night solo lockdown at the Old South Pittsburgh Hospital in Tennessee and continues where I left off on Episode 2. So if you have not yet watched Part 1 or 2, stop this and watch those first.

This episode focuses in on the 3rd floor where it is said the most concentrated area of paranormal activity takes place. I also spent most of time up there investigating the supernatural claims.

There is 3 operating rooms, a Psych Ward that was later turned into a drug rehab area. Toys are moved down that hallway, doors slam shut, Shadow figures, and an apparition has been witnessed of a former patient named Nellie that was found dead in a corner of her room. The old Nursery where many EVPs, and sounds are captured.. and more.

There is suppose to be no power on the 3rd floor but for some reason when I tried a light switch in the Old Nursery the room light worked. Otherwise I was in the dark.

Some of the most creepy EVPs I’ve ever recorded were captured, distinct foot steps, bangs and strange sounds along with some chilling poltergeist activity on film. Even a toy known to make sounds when requested went off when I was prompting it to do so.

I will keep returning to the 3rd Floor to explore and investigate throughout my lockdown and so I compiled all those times here.

I setup static camera’s down that creepy active Psych Patient hallway and captured an object move and a door slam during my lockdown. So make sure to watch this episode it its entirety. 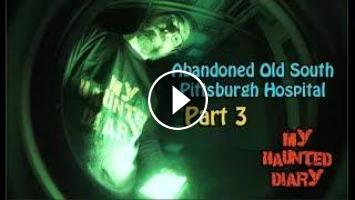