Please use headphones and select HD for video for best viewing.

Private Home Investigation, Undisclosed Location NJ October 2013
A family member reaches out for answers after enduring 25 years of paranormal activity in their home.
When we first met Justin, his family had just recently moved out and he was busy clearing up some loose ends before their tenants moved in. While everyone in his family has had experiences; it was rarely addressed. Now with the home empty, he had one last shot to try and make sense of things.
The activity seemed to start as soon as they first moved into the home prompting his father to begin a conversation with the spirit/s in which he would ask them to respectfully leave the family alone.
Over the years, they've had animals that seemed to react to unseen visitors. Both Justin and his sister have had extremely vivid nightmares at different points, and everyone has experienced that unnerving feeling of being watched. This sense of being watched seemed to dominate the lower floors, in particular.
The following experience was relayed to us when Justin first reached out to our group via email:
"Most recently for myself, I was taking a nap on the couch in the living room when I was awoken by growling right next to my head - to the point where I thought it was our dog growling at something out the window. It wasn't until I heard him move upstairs that I knew it wasn't him - and to further complicate this more, I had the common paralysis that seems to come with encounters of entities. My mind was fully awake and coherent, but I couldn't move my body for several minutes while this was going on. Finally the growling stopped, and I could move again".

This particular townhouse in an otherwise tranquil setting holds a bit of a dark secret.
Unfortunately, a construction worker died while building the families specific unit. There is a 10-12 foot rock cliff that divides the land their townhouse was built on from an open field. He inadvertently backed the machinery he was operating off the cliff, and subsequently broke his neck.
These particular units were also built directly on granite and are in a mountainous area rich in quartz, limestone and slate. All of these factors could certainly account for the activity that is being recorded here.

After conducting a walk through with the client, we decided to focus our attention on the living room and den, the basement, and the area outside behind the townhouse.
We conducted some short EVP sessions in the upstairs bedrooms, but mainly relied on our static cameras to do most of the work in this area.
While we caught a few unexplained noises and faint EVP's throughout the house; the interaction we achieved in the basement and outdoors was pretty significant.
No need to imagine our reaction when you see how astonished the three of us were to hear the word "neck" come out of the Ovilus when placed in the vicinity of the accident.
It was also surprising
This common thread continued throughout both investigations. I think one of the most significant interactions was the P-SB7 ITC session*we conducted in the basement.
The phrase "push a button" followed by "bobcat" even came through. Was this poor soul simply looking to tell his story?

While the process of the investigation itself seems to have provided some closure for our client. The new tenants moved out rather quickly, and the townhouse has since sold.

We are still trying to find out more about the individual who lost his life here. 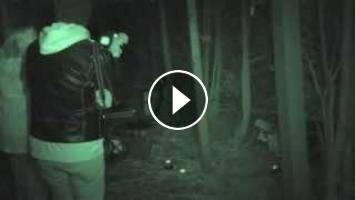