Paranormal explorer James Edward Garcia takes a moment to do a sneak explore of the Belmont Mansion in Nashville, Tennessee while filming with this cell phone.

This is the 3rd intermission vlog episode while traveling and change of living quarters were under way. Back to more quality paranormal explorations in the not too far future for the My Haunted Diary channel.

I visited the Acklen Mausoleum (where owner, Adelicia Hayes Franklin Acklen Cheatham resides) during my exploration of Mount Olivet Cemetery a year back. It will eventually be an awesome episode or two when I finally edit that investigation together.

Haunted Sightings at the Mansion:

The full apparition of Adelicia, attired in a 1800s style, ante-bellum gown, has been seen by the security guards, students and museum staff floating around many parts of the villa, going about her business, checking up on the living, making sure things are in place and are being taken care of properly.

It was reported that a woman was walking down a hallway one evening during an event, and who should she see face to face but the apparition of Adelicia, dressed in a elegant evening gown.

It was reported that Adelicia appeared as a full, solid form and told a museum guide that the furniture in one of the bedrooms were not arranged correctly!

This vlog was an improvised spur of the moment video documenting with phone and contains a lot of spooky music I meshed together to give a dark surreal ambience of the past. I do not consider this a real paranormal investigation though I attempted some spirit communication while there.

Check out my Web Site: www.MyHauntedDiary.com 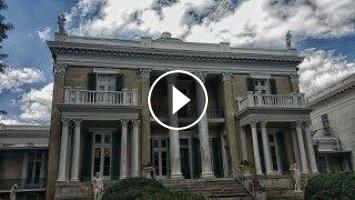 Paranormal explorer James Edward Garcia takes a moment to do a sneak explore of the Belmont Mansion in Nashville, Tennessee while filming with this ce...