A Demon talks, Caught on video tape, could this be the Devil, Satan, Beelzebub, or Baal? This Scary as shit demonic communication occurred during a LIVE paranormal experiment to make contact with the other side...Some of the paranormal experiments we did were a Ouija Board Seance, Ghost Box, Dybbuk Box, and ITC experiments. What will happen, find out. The last time this was conducted the team came across a demonic entity named ZoZo.

The Ouija board (pron.: /ˈwiːdʒə/ WEE-jə) also known as a spirit board or talking board, is a round board marked with the letters of the alphabet, the numbers 0-9, the words "yes", "no", "hello" (occasionally), and "goodbye", along with various symbols and graphics. It is a registered trademark of Hasbro Inc., which markets and distributes the Ouija Board as part of its line of board games. It uses a planchette (small heart-shaped piece of wood) or movable indicator to indicate the spirit's message by spelling it out on the board during a séance. Participants place their fingers on the planchette and it is moved about the board to spell out words. It has become a trademark that is often used generically to refer to any talking board.

Following its commercial introduction by businessman Elijah Bond on July 1, 1890,the Ouija board was regarded as a harmless parlor game unrelated to the occult until American Spiritualist Pearl Curran popularized its use as a divining tool during World War I.

Mainstream religions and some occultists have associated use of a Ouija board with the threat of demonic possession, and some have cautioned their followers not to use an Ouija board.

While Ouija believers feel the paranormal or supernatural are responsible for Ouija's action, it is parsimoniously explained by unconscious movements of those controlling the pointer, a psychophysiological phenomenon known as the ideomotor effect.Despite being repeatedly debunked by the efforts of the scientific community and deemed superstitious by traditional Christians, Ouija remains popular among many people 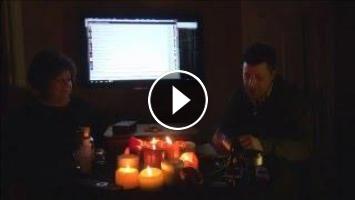 A Demon talks, Caught on video tape, could this be the Devil, Satan, Beelzebub, or Baal? This Scary as shit demonic communication occurred during a LI...