Scariest Ghost Hunt Ever, Demon Caught on Tape! Watch the Chilling Video Footage LIVE tonight from the safety of your home. Multiple scratches and demonic like possession occurred during this terrifying, paranormal investigations from the notoriously haunted Sallie House. What type of paranormal activity will be captured, what types of things will be experienced? Find out!

The Pickmans experience much phenomena, including:
-Wall-hung pictures turned upside-down
-Strangely melted candles and burnt finger marks
-Multiple photo anomalies
-Tony had an actual sighting of Sallie on Halloween morning, 1993
-While napping, Tony heard of woman's voice say, "Here's your remote," as the TV -During the first Sightings taping, Tony received three bloody scratches on his arm
-One night Tony dreamed that he was being pulled out of bed by his wrist by a little girl. -Upon waking he found burn marks on his wrist that were much like the fingerprints of a small child. 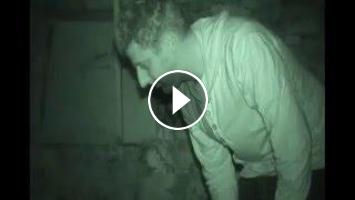 Scariest Ghost Hunt Ever, Demon Caught on Tape! Watch the Chilling Video Footage LIVE tonight from the safety of your home. Multiple scratches and dem...