A Supernatural Deadly Haunting a family under a poltergeist siege in the 1980s, Ed & Lorriane Warren Case. Deborah Moffitt is the experiencer behind the acclaimed novel A Deadly Haunting, which drew upon the frightening experiences she and her family endured at the hands of “Mr. Entity,” their unseen tormentor. Vastly intelligent and destructive, this demon wrought havoc in their lives and home, resulting in a daily battle to maintain their sanity. After 25 years Deborah decided to tell her story, detailing what went on in her family's home during the six year period of nightmare in which “Mr. Entity” plagued them.
Todd Hendrickson:
Todd Hendrickson currently resides in Southern California. He has studied at Regis University
where his curriculum centered on computer information systems and network administration. Intrigued by the paranormal at an early age, he has spent the last eighteen years researching occult and paranormal phenomena. His current research path attempts to breach the gap between the various mystical traditions through the lens of Western Hermeticism. His research has been published in the book Unwelcomed, FATE Magazine, and Carroll Runyon's publication The Seventh Ray: Book II. In his spare time, he’s an avid ghost hunter who is always looking for the next case in the hope that it will lead him a little closer to a “grand unifying theory” of the supernatural.
Deborah's new book Unwelcomed is a purely nonfictional account of what she and her family experienced. Going into more detail of the paranormal phenomena she witnessed, Unwelcomed gives the reader a first-person perspective into the daily torment the Moffitts struggled through in their quest for relief. Many luminaries assisted in their quest, including Ed and Lorraine Warren, Brian Hurst, Kerry Gaynor, and dozens more in the years the entity plagued them.
With Norene Sampiere Balovich #paranormalzonetv #deadlyhaunting #LorraineWarren
Episode #1 : https://www.youtube.com/watch?v=V4Nmpp5VwLg&t=193s
Episode #2 : https://www.youtube.com/watch?v=rkgvReZawDk&t=2s 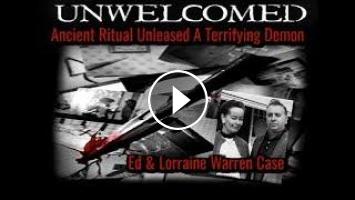 A Supernatural Deadly Haunting a family under a poltergeist siege in the 1980s, Ed & Lorriane Warren Case. Deborah Moffitt is the experiencer behind t...