My Haunted Diary quick explore at the Abandoned Military Fort Tilden. Suppose to be a tour where tour guide never showed up. Some EVPS and footsteps captured. Check it out.

Here is a video log from a day back in April 30 of 2017 when I was supposed to do a tour of Fort Tilden but the Tour Guide never showed.
I didn’t read up to find out about the layout, history, or the building structures since I thought the tour guide would be handling that.

This video marks the anniversary of meeting my wife Martie and the reason I decided to put it together. So, you will see her and Marissa in the last portion of this episode when we hooked up for the tour that never happened. I know now, as fate had it, this was all about meeting each other, not a tour.

I did come up on the two artillery (batteries) but unfortunately, I was not able to squeeze through the barred gates to get into the actually corridors of those casemates.
I did climb up the Observatory Deck on top of Battery East where you can see a 360 degree view around the Rockaway peninsula including the Marine Parkway Bridge.
I did manage to explore the ammunition (magazines), which I mistakenly called bunkers while there. Some of the buildings have been renovated and are used by local arts groups and park services, including a theater group which I walked into while they were in a meeting session.

I do end up working my way into the one popular Military storehouse or should I say Warehouse which seems to contain artistically graphitized objects of the past inside and out. I snuck in with Martie and Marissa who I met up with later that afternoon.

Fort Tilden is a former United States Army installation located on the Rockaway Peninsula on the coast in the New York City borough of Queens. The area is now operated by the National Park Service.
Military installations had been around this site starting as far back as 1812.
Fort Tilden was built right after entering World War 1 in 1917. The Fort was there to protect the US borders around New York City coastal area.

This abandoned installation continues to decay around a beach, where you can find underground bunkers, machine gun pill boxes and other buildings. Unfortunately, I never got the chance to go back and explore those portions.

There is also the abandoned Floyd Bennet Field once used as a military aviation airfield. It still has a portion used for NYC Police helicopter base. I never got around to exploring the military airport, though I wanted to.

Located on part of the beach is Dead Horse bay, also called bottle beach which I had explored a few years back, and I’ll talk more about it when I edit that exploration video following this one.

There are more videos on the way from my time at other haunted and abandoned locations. My channel keeps growing with explorations into the supernatural in some of the most haunted places in the US so make sure you subscribe. 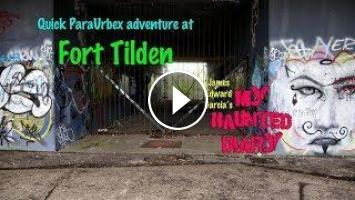 My Haunted Diary quick explore at the Abandoned Military Fort Tilden. Suppose to be a tour where tour guide never showed up. Some EVPS and footsteps c...