Exploration and Tour from my first visit to the New York Hotel back in January 2017. I capture some EVPs while in the hotel tunnel that leads to Penn Station. I will return a week after to do a paranormal investigation in the suite Nikola Tesla lived the last 10 years of his life. But this episode is more an exploration with a tour group led by Chief Building Engineer – Joe Kinney.
We visit the Boiler Room, Engine Room, a Shaft where you can see the sidewalk to 34th street above, and an old Bank Volt. I do wander off initially on my own and search for the tour group in staff areas off limits to the public. I also present a brief history of the Hotel. Check it out!

This is part 1 of my time at the New Yorker Hotel back in January 2017.
My main interest in the hotel was the fact that Electrical Engineer, Inventor, and Pioneer in the usage of electricity, Nikola Tesla had lived the last 10 years of his life here.

I had booked 3 nights at the Hotel so that I could stay in his suite. As a paranormal investor, staying in the room where Tesla not only did his experiments but passed away was high on my list. I will go more into that during my stay in the episodes that follow this one.

But for this initial video I present moments of filming during an after-hours tour of the hotel that took place a week before my reservation.
This episode is not a paranormal investigation, but an exploration in areas of the hotel led by Joe Kinney, the resident Chief Building Engineer and Director of Property Operations.

I ended up losing the tour group initially when I got side tracked briefly exploring an area of the lower lobby. I was given permission to try and search for them in the off-limit staff areas of the hotel which I filmed while trying to locate them. I did capture one EVP while in the stairwell to one of the staff areas.

Unfortunately, during that time, I missed out going onto the Roof of the Hotel with the tour group.

But I was given the chance to make up seeing the tunnel from the hotel that led to Penn Station on my own. I did capture a few EVPs while in there that I will showcase.

I rejoin the tour group and go into both the Boiler Room, and Engine Room, which I had passed by earlier.
We also enter a shaft that you can see the sidewalk of 34th street above. Lastly, we visit the old Bank Volt containing the last remnants of the Manufacturer Trust Company Bank, which originally resided on the ground the Hotel eventually was built on top of.

Make sure to check back for Part 2 where I begin my stay at the hotel for 3 nights in Nikola Tesla’s Hotel Suite.

There is more on the way from my time at this Hotel and my channel keeps growing with explorations into the supernatural in some of the most haunted places in the US. So make sure you subscribe.

A My Haunted Diary Production
A Film by James Edward Garcia
Production music by www.epidemicsound.com (http://www.epidemicsound.com/)
Some sound effects from Apple Final Cut.
Opening & Closing Theme Music as well as some other portions
of this film composed, performed, & recorded by James Edward Garcia.
Pics and edited video footage off Internet used in History Section.
Some of the pics used in opening narration off Internet.
Otherwise all photos and video done by James Edward Garcia.
Special thanks to Joe Kinney for the Tour, Insight, & Hospitality,
& to the Hotel Staff for assisting and allowing me to Film. 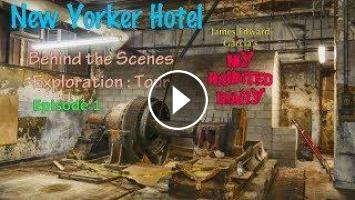 Exploration and Tour from my first visit to the New York Hotel back in January 2017. I capture some EVPs while in the hotel tunnel that leads to Penn ...